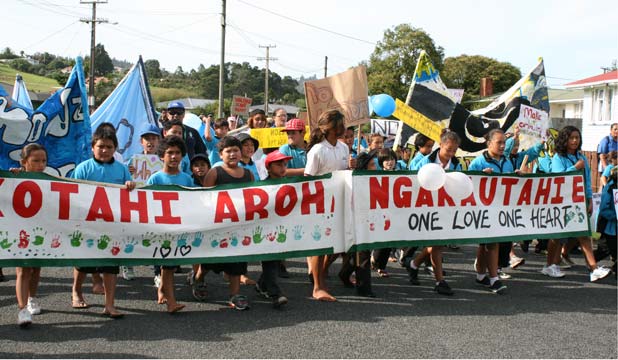 Empowered pensioner Dennis Walker is taking a stand against violence and vandalism in his neighbourhood.

Mr Walker and his wife, both in their mid-70s, have been harassed in their Otangarei house for speaking up about gang activity.

One night they had seven windows smashed while they were inside.

But Mr Walker says it is encouraging to see the community standing up and speaking out in a hikoi.

“This is fantastic,” he says. “This is what needs to happen. People get away with it because residents are concerned of reprisal.”

A lively march along William Jones Drive was initiated by the Otangarei Maori Women’s League and put lawless gangs and residents on notice. League president Noreen Moorhouse QSM says the aim was to show how many decent, law-abiding citizens and children there are in the neighbourhood. The area has some people who break the law and problems with girls drinking behind the marae, she says.

“We’re saying: `This isn’t the way we want Otangarei to look, we want you to take charge of your children and be more law-abiding’.”

The hikoi noise drew a number of residents from their houses. Some watched and waved in support. One says it was the best thing to ever happen in Otangarei.

The health care centre is also pleased with the turnout.

Chairwoman Janine Kaipo says the centre has spent $10,000 on graffiti removal and vandalism repairs – money that could be better spent on people’s health. The hikoi finished with a barbecue provided by Housing NZ and the Maori Women’s League.