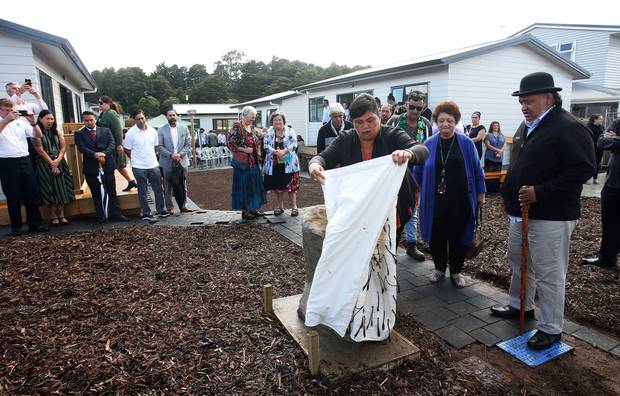 Papakāinga which have long been a vision of the Otangarei community have been officially opened.

The six two-bedroom units – five of which will be available for whānau and one for onsite kaumātua and kuia support – have been under construction since mid-last year but have been a vision of Martin Kaipo, the chief executive of Te Hau Āwhiowhio o Otangarei Trust, for much longer.

They were officially opened by Māori Development Minister Nanaia Mahuta at a ceremony in the Whangārei suburb on Tuesday.

Martin said the papakāinga, developed by Otangarei Papakainga Ltd – a subsidiary of Te Hau Āwhiowhio – would help whānau who had been sleeping rough.

“Hopefully the long-term goal is for our whānau to get them in to employment and look at home ownership,” he said.

William Kaipo, Te Hau Āwhiowhio o Otangarei Trust project manager, said it was exciting to see the papakāinga completed, but the most exciting part of it was the ability to help others once whānau had moved in.

“It was important when the idea was first mooted but it’s even more important now given the housing situation. It’s desperate to absolutely dire now,” Kaipo said.

“Unfortunately for our whānau – the whānau that we work with – the first ones who feel the pressure of those sorts of shifts are the lower income, vulnerable whānau as there’s a cascading effect,” he said.

The opening comes a year and a month to the day Mahuta announced funding of almost $900,000 for the papakainga -$450,000 from Te Puni Kōkiri and $431,241 from the Ministry of Housing and Urban Development.

The Otangarei Papakāinga contribution was $50,000 and Te Hau Āwhiowhio o Otangarei Trust provided a loan of up to $200,000.

Māori Development Minister Nanaia Mahuta on Tuesday acknowledged the Otangarei community for identifying a problem and finding a solution.

“The focus of this papakāinga is to provide whānau Māori, who are homeless or at risk of homelessness, with a setting where kaupapa Māori wrap-around-services will help them get back on their feet faster,” she said.

William said the papakāinga gave whānau the opportunity to work through other issues which were often compounded by a lack of housing.

“By doing this we’re hoping we can relieve that pressure initially and then once we peel back those layers, make some change and help people into more long-term sustainable living arrangements.”

Kaipo said discussions with the Ministry of Social Development about finding whānau to live in the papakāinga were “well under way”.